What U.S. Catholics Think on the Eve of the Pope’s Trip

With Pope Francis coming to our country later this month, there’s been plenty of curiosity as to what U.S. Catholics think of him, and how they perceive his views on current issues. Many on the left are particularly interested because they are hoping this pope will change Church doctrine to reflect “enlightened” secular positions on marriage, sex, contraceptives, divorce and homosexuality – and that American Catholics will approve.

Three surveys have been released in the past two weeks that attempt to throw some light on U.S. Catholic opinion. First, the Quinnipiac University poll: The survey found that 66 percent of American adults had a “very favorable” or “favorable” opinion of Pope Francis. The Catholic favorability rate is 87 percent; Protestant 61 percent; and 63 percent of non-believers have a positive view of the pope. What the poll does not reveal, however, is why they are fond of him.

Quinnipiac also asked what adult Catholics thought in general about their Church leaders. Sixty-eight percent of weekly Mass attendees believe the hierarchy is in touch with the views of Catholics in America today, while only 47 percent of less observant Catholics agreed. No surprises in those findings. You don’t need a poll to learn that cafeteria Catholics generally disapprove of Church leaders who teach and promote doctrines they don’t like.

The last question, though, was a silly one: “In general, do you think the Catholic Church of today is moving in the right direction or the wrong direction?”

The survey doesn’t indicate what right or wrong direction means. Presumably, it was left up to the respondent’s imagination or recent mainline media interpretations that Pope Francis is moving the Church to the left on economic and cultural issues. But how much does it matter how non-believers and Protestants perceive the Church?

The next opinion poll survey released on September 3 was by the Pew Research Center. In anticipation of the October synod in Rome, Pew asked American Catholics for their views “about family structures, religious beliefs and practices, and other topics.” 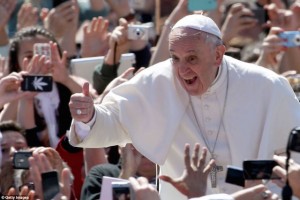 Parts of the Pew poll employed odd methodologies. For instance, the pollsters created a “Cultural Catholic” category. These are 9 percent of respondents who “often think of themselves as Catholics in one way or another even though many belong to another faith tradition (such as Protestantism). Others are religiously unaffiliated, identifying as atheist, agnostic, or simply ‘nothing in particular.’” Huh?

The remaining answers to questions on family and marriage in the Pew poll don’t hold water because the respondents included cultural Catholics, ex-Catholics, and people who claim to have “connections to Catholicism” by way of “a parent or spouse, or through occasional attendance at Catholic Mass.”

The most thorough and revealing survey was commissioned by the Catholic League for Religious and Civil Rights. It covers a large number of issues and its questions gets into the weeds, “to tap the ways Catholics are conflicted over various matters.”

Here are some highlights of the 45-page report:

Despite the confusion on various issues caused by the media’s deliberate misinterpretation of off-the-cuff comments made by Pope Francis during the past two years, it appears practicing Catholics by and large still stand by Church teachings, particularly those on the family. The next question is, in October, will the pope and the bishops at the synod stand by those same teachings?