Suicide and Sins of Omission

For the past eight years, at this time of year, as summer begins to loosen its grip and sporadic intimations of fall obtrude, I recall my co-worker’s suicide.

Initially, we heard only the unelaborated fact that she had died of a bullet wound, and our first assumption – perhaps hope in a way – was that she had been murdered. For when I say “co-worker,” I am not being technically accurate: Frustrated and unhappy and passionately committed to work goals she felt had been stymied, she had applied for a temporary assignment in another department, and we knew that the move was likely to become permanent.

Suicides notoriously cause anguished second-guessing among those they leave behind. Surely somehow something could have been done to prevent it! And if so, the corollary one is tempted to draw is that somebody, maybe many somebodies, must have been guilty of something like a “sin of omission.”

Guilt over things undone is common even when the stakes are much smaller than life or death. In fact, most of us almost daily convict ourselves of less extreme forms of dereliction. There are wrongs we neglect to oppose, rights we fail to support, worthy causes we do not support, works of charity we do not show up for, parish or school or civic responsibilities we leave to others, and on and on and on.

Though I regret the many things I do that I should not – sharp words, time squandered, self-indulgence, and so on – the “sins of omission” and their morally more ambiguous near relatives, the neglected good acts and the missed opportunities to make a difference, pile up beyond my capacity to count them.

Back for a moment to my co-worker. She belonged to one of those doctrinally stripped-down Protestant churches, but had cultural ties to Catholicism. One day she stopped by my office early in the morning to ask if she could borrow the holy water I keep on my desk to sprinkle around her new office space. She was feeling “negative energy” that she wanted to counteract. We went and liberally showered her new workspace after saying a brief prayer.

Another time she came by to give me some photos she had taken of the Blessed Mother at the National Shrine of the Immaculate Conception here in Washington, D.C. I don’t know why exactly she went there or what the photos meant to her, but she knew that Mary meant something to me. I’ve stuck them in a frequently re-read book, where they function like memorial cards, moving me to say a prayer for her when I come upon them. 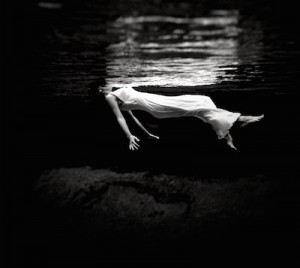 Far from the stereotype of a depressed loner, my co-worker was extroverted, active, and engaged, full of extravagant and thoughtful gestures. She was still single when her sister died, leaving her to bring up her nephew to responsible adulthood. But a catalog of her accomplishments, however crowded, leaves me feeling that a résumé is insufficient to capture a life or evaluate its significance.

All the “doing” I admired in her and all the “not doing” that we all (she included) beat ourselves up for, while not irrelevant to judging what we are in relation to what God intended us to be, are not really the point. The Desert Fathers “produced” very little, yet they were being the kind of people God wanted them to be, and in so doing calling down huge graces on themselves and the world. Babies, the enfeebled elderly, and the profoundly handicapped are immeasurably loved by God though they contribute little or nothing to a nation’s GNP. “Doing,” while it says something about priorities and motivation (“Be doers of the word and not hearers only” says St. James), is in fact a crude place keeper or substitute for measuring the abundance or insufficiency of love.

And here I mean not sentimentality or warmth of feeling (though such warmth, when present, can help fuel action), but an act of the will, which is why the Church composes prayers like an “Act of Faith,” “Act of Hope,” and “Act of Love.” These can be recited, willed, and then acted upon, even in moods of doubt, despair, or distaste for spiritual things. (Remember St. Therese’s admission that as her long period of spiritual darkness set in, “I have made more acts of faith in the last year than in all the rest of my life.”)

A significant part of that willed love involves attending to others – grappling with situations that may spiritually or physically endanger or afflict them, yes, but also paying attention to them, treating their concerns seriously, treating them seriously, as persons rather than as objects we trip over in pursuit of our own goals.

“Attention must be paid,” Willy’s wife insists in Death of a Salesman. As an expression of the love God lavishes on us and expects us to pass on to others, in some way or other, attention must be paid to all fellow pilgrims on this earth. I think of St. John Paul’s storied attentiveness to each person he encountered, of Mother Teresa’s perception that even the most repulsive or disagreeable person was Christ in distressing disguise.

At this time of year especially, paying the only kind of attention I now can give her, I pray for my co-worker’s soul.