Who Stands Up for These Marginalized?

Today (September 19, 2015) at 3:30 Eastern, Robert Royal will appear with host Raymond Arroyo and TCT contributor Father Gerald Murray on EWTN to discuss the Holy Father’s arrival in Cuba. Check your local listings for the station in you area. UPDATE: Bob’s first report, on the pope’s arrival in Cuba, may be read by clicking here.

You want people on the margins? The neglected, the invisible?

Last Sunday I was waiting in a diner for a former student of mine, one of my favorites, and his wife, whom I hadn’t met before, and who was carrying their first child. While I was waiting, I glanced over at another table and saw something remarkable.

It was a boy and a girl who had just sat down. They couldn’t have been more than twenty years old, and they might have been as young as sixteen. He was no body-builder, but he was tall and well set up, as they used to say, clean cut, no tattoos. She was slender and pretty, with long dark hair. As he was talking to her, his cheeks were flushed with delight, and he was beaming from ear to ear. She was smiling happily and sweetly in return. They might have come to the diner straight from church, as I had. They shone out with innocence.

They might have been somebody’s father and mother, a long time ago, before they had determined that their delight in one another’s company was really love, before they had decided to make that company everlasting, and before they had sealed their love and their vows with the full-hearted and full-bodied gift of themselves.

So what was remarkable about them? Reader, friend – when was the last time you saw such a couple?

Then my young friend and his wife arrived. He had not known God at all until he experienced a sudden and shattering vision during the summer before his freshman year at college. He spent that summer reading the Bible and pitching himself with all his considerable resoluteness into a new way of life.

It is seven years later. He’s been working for the Coast Guard, hard physical work, from Nova Scotia to the Falkland Islands, and from the Dominican Republic to the Mediterranean. They don’t even have a chaplain or a small chapel on board ship, he tells me, and sometimes one of the men will mock him when they come upon him kneeling in prayer. I doubt that the mockery is ever too serious, though, because this young man has, shall we say, a formidable presence. Not that he minds it.

So I chatted with them also about their plans, and he looked upon her with pride and protectiveness, and she looked upon him with admiration and delight. Again it was purity, right and just, though purity as having come through the smoke and bitterness of the world. 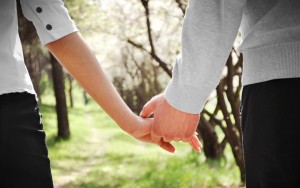 Why are these sights so rare?

I notice that the American president has made sure that Pope Francis, when he comes to visit the White House, will meet a man representing a group that is now always at the center of attention. Even should you descend into the depths of the newspaper, the sports pages themselves, they are there.

Not one day goes by without our hearing about their problems, their demands, their accusations, their mostly invented cultural history, and so on. Sometimes, as in the case of the man whom the president has elevated to brief celebrity, they proudly spurn the teachings of the Church. Sometimes they proudly follow those teachings but demand that everyone applaud them for doing so, and notice them, even change the way they raise children on their account.

I’m tired of it. And I grow downright angry when I consider the people about whose welfare no one ever troubles himself.

Think of the boy and girl at the other table. Now name for me one single social custom, one single local ordinance or state law, one single common work of literature read in the high schools, one single august pronouncement from the episcopal heights, one single session of prelates in council, one single social institution, one single jot of advice given to them from their teachers of “health,” one single word of encouragement or guidance or praise from the media or the mavens of art or those voluble blockheads in the academy, that will show, not even gratitude for their purity, but awareness that such young people exist?

Or if they are acknowledged to exist, here and there, are they not mocked, assaulted by the whores of pornography at a thousand virtual street corners, and rejected by their peers?

Who pays them any mind?

C.S. Lewis once wrote that if we really understood the purposes of things, we would see that all of politics and economics and technology exist so that a couple of friends can chat about good books at their leisure; or, as I’d say, so that a mother and father can sit quietly on the back porch as they watch their small children play; or so that a boy and girl, over the moon for one another, can have lunch at a diner and never once think of the lewd, the squalid, the hard-hearted, the licentious, or the base.

So also I might say about our pastoral directives as regards youth and sex. These are the people we must assist, and not take for granted that they will survive the current onslaught of falsehood and wickedness. We want every diner in every little town in the country to be graced with the laughter of innocent young people in love. What are we doing to see to it?

I might put it this way. Why are we doing all we can to ensure that such youths are as rare as diamonds? If we give all our attention to people whose desires are out of order with their bodies, smiling upon Sodom and grinning with Gomorrah, hypocritically and heartlessly saying that we wish to be merciful, we implicitly join the gang of their high school peers who laugh at them. We imply that they are chumps. And eventually, God forbid, even those last few innocents may come to agree.

Senior Editor’s note: Beginning today (3:30 Eastern)), Robert Royal will appear with Raymond Arroyo (and Fr. Gerald Murray) on EWTN to cover the journey of Pope Francis to Cuba and the U.S. Please take special notice of the banner below that will appear above each daily column during the duration of the pope’s New World travels. By clicking on the banner, you’ll be able to read Bob Royal’s reflections about the trip, updated daily, and also see links to media events of note. Where else but at TCT? – Brad Miner