Note: in these last days before Christmas and the New Year, we’re very close to our fundraising goal now for the end of 2016, which will be the basis of our support for the first half of 2017. In this special season, I‘d like to make a final plea that you do what you can to support The Catholic Thing. We are going to be smack in the middle of at least as many questions next year as we were in this. If you’d like to be part of these efforts, please: click here or on the Donate button and choose one of the easy ways that you can contribute (tax-free) to TCT’s work today. – Robert Royal

Isaiah’s prophecies (e.g., “Suffering Servant”) are often fulfilled in the Person of Christ. By my reckoning, the first clear hint of the Incarnation comes with Isaiah’s use of the word “Emmanuel.” Although clues about “God with us” are found earlier (e.g., Exodus 33, “And He said, ‘My presence shall go with you, and I will give you rest.’”), the OT personification of “God is with us” by name appears only in Isaiah. Why is it so necessary to anticipate and know Emmanuel?

Some folks say they do not need “organized religion” because they find God in the great outdoors. Good for them! So do Catholics. Sort of. In nature we are reminded of God because we are thoughtful human beings and the beauty of nature radiates God’s truth, preparing the way to Him.

But we do not really encounter God in nature, except by way of metaphor, or by reference to the Sacraments as we rejoice in His glorious handiwork. We properly “find God” in the Sacraments and therefore proclaim Him: “That which was from the beginning, which we have heard, which we have seen with our eyes, which we have looked at and our hands have touched – this we proclaim concerning the Word of life.” (1 John 1:1)

The (allegedly good) angel said to have dictated the precepts of Islam to the Prophet Mohammad either forgot a few things, or Mohammad failed in note-taking. Mohammad correctly teaches the majesty of God, His absolute oneness, and the Last Judgment.

Even Mary has a place in Islam. Muslims view Jesus as a great prophet, but a mere man. By its rejection of Emmanuel (“God with us”), however, Islam jettisons the entire Catholic sacramental system. That rejection comes with heavy a price.

There are, certainly, many good Muslims and countless bad Christians. But the measure of “good,” consciously understood or not, is the Ten Commandments and the teachings of Christ.

Good people are those who worship God, honor their parents, protect human life, live chastely (marital relations, of course, are “chaste” within marriage), respect property, and speak the truth in charity. 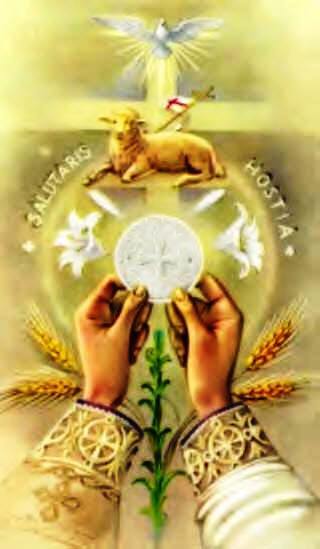 Bad people see nothing wrong with strapping on suicide vests and blowing people up, stealing and lying, slaying unborn babies or practicing contraception – just to mention a few nasty habits. Morality is inseparable from Creed and, for Catholics, our Creed points to the Sacraments where Christ becomes truly and infallibly present in history.

Beyond individual goodness, any culture by definition depends upon “cultic” practices: belief manifested in ritual and the practice of faith.  And the cultic practice of faith has a cumulative effect on a society. (Don’t tell the atheists: Christmas wreaths testify to the living God, without beginning or end.)

The practice of the Catholic Faith – the free encounter of Jesus (Emmanuel, the Word made Flesh) in the celebration of the Sacraments gives rise to a civilization of Christian – and authentically human – freedom and holiness.

Islam provides us with a stark and very instructive contrast. God is transcendent, distant – and apparently not keen on human freedom. Islam with its denial of the Emmanuel of the Incarnation gives rise to a society that isn’t truly free, requiring submission to the harsh Sharia rule. Under Sharia, there is a forcible submission to the will of Allah, if necessary, or at least the forcing of “infidels” (like Christians) to pay tribute as the price of life and some liberty of worship.

Any attack on the sacramental system of the Church – even from within the Church – is an attack on belief in the Incarnation and on Christian civilization.  At the moment, bourgeois secularism is filling the void that has followed in the “post-Christian” West.  But secularism’s intellectual and moral flabbiness cannot withstand the concerted Islamic onslaught that seems to be gaining strength in Europe and America.

Concepts such as “diversity” and “multi-culturalism” invite a kind of sentimentalist tyranny that risks not only ushering in cultural decay and destruction, but the Trojan Horse of Islam.

Some may profess to be happy with the prospect of coexistence with Sharia law, even living as Christians under the constant threat of persecution.  But we should consider the entire history of Islam and its worldview before buying into or making peace with the ideology.  After all, the Islamic creed doesn’t permit buyer’s remorse.

Catholics believe in repentance in Christ and the Sacrament of Penance for sins committed.  But those who convert from Islam to another religion are guilty of a capital offense, not to mention the other crimes where punishments include various forms of dismemberment.  (Need we bring up female circumcision?)

Since the presidential election, it feels as if our confused nation has been granted a partial reprieve. There are glimmers of hope that the secularist attack on our religious freedom will ease. Even the phrase “Merry Christmas” may be making a comeback.  But despite these hopes, our culture will largely remain an empty shell of Godless secularism unless we begin and continue to do something about it.

Americans have for many years lived, by historic standards, at the 99.9th percentile in terms of economic plenitude and comfort. Of course all of this is by God’s grace, a gift for us to use wisely for the salvation of souls. And if we cannot find the wherewithal to renew our Christian culture, at least beginning within our homes and families, God will find an alternative, or an alternative will find us:

“God with us” is the God of the manger and the Eucharist – and it is only in Him that we will do something.