Note: We’re moving along with our fundraising campaign but still need many more of you to join in. As you will see in Bill Donohue’s column today, the usual sources of information and leadership in the Church – such as Georgetown University – are not of much use, even on clear problems like sex abuse. Indeed, they present multiple problems of their own that only independent voices can address directly. We are an independent voice because we are supported by readers, like you. Tomorrow is Sunday, when no one should be fundraising. So let’s make some real progress towards our goal today. Click the button, and do your part. Support The Catholic Thing. – Robert Royal

On June 14-15, 2019, over fifty persons, most of whom were Catholic, assembled at Georgetown University for an event titled, “National Convening on Lay Leadership for a Wounded Church and Divided Nation.” It was organized by the Initiative on Catholic Social Thought and Public Life, headed by John Carr and Kim Daniels. The issue before the gathering was the clergy sexual-abuse scandal. A report on the proceedings was released this week.

The report aptly noted that “The Church’s moral credibility has been seriously wounded by the abuse crisis, and bishops no longer possess the moral standing they once enjoyed in public life.” It could also be said that the intellectual credibility of the Initiative on Catholic Social Thought and Public Life has been seriously wounded by this venture. That nothing of any substance was accomplished is perhaps the kindest thing that could be said about it.

The report lists ten recommendations on how to address clergy sexual abuse, most of which are pedestrian. How creative is it for the report to list such things as “Focus on Gospel mission and build unity”? Another ground-breaking suggestion is, “Be both humble and bold.” A real throw-away line is the advice to “Build partnerships and enhance collaboration among clergy and laypeople.” More vagueness is evident in their recommendation to “Develop a national collaboration among ministries.”

Such platitudes mean zero if not operationalized. How are these nebulous outcomes to be achieved? That’s where the rubber meets the road. It’s like having a convention on crime and concluding that everyone needs to be more vigilant. Swell.

Most of the report centers on three issues: clericalism, diversity, and the laity – none of which has anything to do with why young males were abused by priests. The rights of accused priests were not mentioned.

Ever since the Vatican summit earlier this year, “clericalism” has emerged as the number-one talking point in establishment Catholic circles. Clericalism may have something to do with why some bishops were enablers, but it is of no explanatory value understanding why priests abused young males. Invoking clericalism is a dodge: its purpose is to direct the conversation away from the molesting priests. That way the subject of homosexuality can be skirted.

It is commonly said that many of the priests who engaged in gay sex with their victims did not identify themselves as gay. So what? It would be like saying that an Irishman who has a drinking problem is not Irish because he thinks he is an Italian. What matters is that, just as the Irish are overrepresented among alcoholics, gay priests are overrepresented among sexual abusers. To pretend otherwise is deceitful.

Similarly, “diversity” has absolutely nothing to do with clergy sexual abuse. Having more minorities and persons from different economic strata participate in the affairs of the Church are worthy goals, but so is combating spousal abuse. Recommendations that are unrelated to the problem are positively useless.

There is great irony in a conference of lay Catholics saying that terms like “Your Eminence” and “Your Excellency” need to be retired – they smack of clericalism – while demanding a greater role for themselves.  This reads like a textbook power grab. Lay clericalism is hardly less of a problem.

Recommendations to curb clergy sexual abuse that do not address the link between dissidence and abuse are absurd. Where do they think the Paul Shanleys of the Church got their ideas, and the brazenness to act on their worst impulses? From orthodox Church teachings on sexuality?

Of course, the organizers of this event don’t see the link between dissent and abuse: they work for Georgetown University, home to two pro-abortion student groups. That they singled out the National Catholic Reporter for praise – it rejects the Church’s teachings on sexuality – shows how utterly clueless they are.

Even worse, Carr and Daniels welcomed as participants some who have worked tirelessly to undermine the Church. One of the moderators, in fact, is a man who taught the secular media how to subvert the bishops during their “Fortnight for Freedom” events. His name is John Gehring, a tool of George Soros.

Why was Terrence McKiernan chosen to be at the event? Are Carr and Daniels aware that he has lied about Cardinal Timothy Dolan, accusing the archbishop of New York of hiding fifty-five predatory priests? When asked to reveal their names, he has not been able to do so. I know – I’m the one who has called him out for his smear.

Alexia Kelley is another curious invitee. What did they expect a person who worked for Catholics in Alliance for the Common Good would bring to the table? This discredited and defunct organization, another Soros entity, showed up in the infamous Wikileaks document as an institution created for the express purpose of undermining the Catholic Church.

After reading this report, I am having second thoughts about awarding the laity more power. Consider what Michael Sean Winters of the National Catholic Reporter had to say about this subject.

He warned his fellow left-wing Catholics that “if there were elections for lay leaders, it is more likely than not that Bill Donohue and George Weigel and Raymond Arroyo would win at the Catholic polls.” 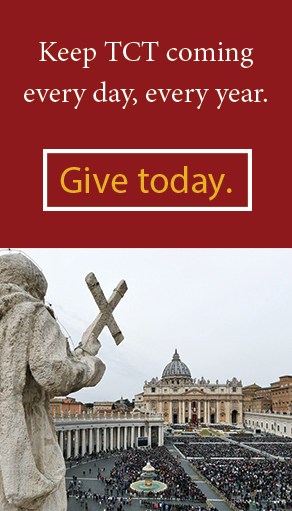 Bill Donohue is president of the Catholic League for Religious and Civil Rights. He holds a Ph.D. in sociology from New York University and is the author of several books on civil liberties, social issues, and Catholicism.