By now, we’ve all read about the plight of Kim Davis, the Rowan County, Kentucky, clerk who refused to put her signature on government-issued marriage certificates as the law required. She could not in good conscience place her imprimatur on a document that would officially certify what she believed was a falsehood, namely, that two people of the same sex could in-principle form a marital union. As she put it:

To issue a marriage license which conflicts with God’s definition of marriage, with my name affixed to the certificate, would violate my conscience. It is not a light issue for me. It is a Heaven or Hell decision. For me it is a decision of obedience. . . .It is a matter of religious liberty, which is protected under the First Amendment, the Kentucky Constitution, and in the Kentucky Religious Freedom Restoration Act. Our history is filled with accommodations for people’s religious freedom and conscience.

Not unlike the public school mathematics teacher who refuses to tell her students that 2+2=5 when her principal orders her to include it in her lesson plan, Ms. Davis could not, as a matter of conscience, agree to say, with her signature, that any same-sex union is marital. Marriage, of course, is not mathematics, but the metaphysical axioms that make same-sex marriage self-evident for some and an ontological impossibility for others are precisely why we are divided on this question. (As I argue in chapter 7 of my forthcoming book, Taking Rites Seriously: Law, Politics, and the Reasonableness of Faith.)

For Ms. Davis’ resistance, a federal judge ordered her to jail, where she stayed for five days until her release on Tuesday. This, unsurprisingly, resulted in a firestorm of commentary, ranging from Eugene Volokh’s measured and careful assessment of Ms. Davis’ legal options to Luma Simm’s difficult-to-grasp stream of consciousness to Rod Dreher’s interesting, provocative, and thoughtful stream of blog posts. (The Davis case is almost the Platonic ideal of “Dreher-bait.” For it resides in the center of the socio-political vortex of homosexuality, the culture wars, a small-town southerner, a form of elite-stereotyped Christian fundamentalism, and jail time. The only things missing are The Divine Comedy and a Wendell Berry sighting). There were also the words of First Things editor, R. R. Reno, who echoed the sentiments of many among religious traditionalists: “I am sympathetic to Kim Davis. . . .In her position, I’d do the same.” 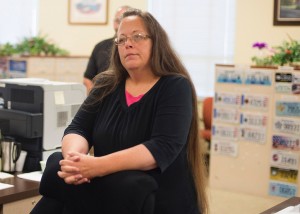 Several commentators have argued that Ms. Davis should have resigned from her post since same-sex marriage is now “the law of the land.” To be sure, that would have been the most efficient way for her to have avoided violating her conscience without incurring the wrath of a federal judge. But it would have also communicated to her compatriots that serious Christians, not to mention observant Jews and Muslims, are the sorts of citizens who, because of their religious beliefs and practices, are not suitable candidates for public service.

A resignation would have been an act of self-imposed civic apartheid, something that America’s tradition of religious liberty has always treated as a last resort only after citizens and public servants of good will have exhausted all attempts at reasonable accommodation.

This is why many of us, both liberals and conservatives, look back with patriotic pride on the federal statute on conscientious objection, the Religious Freedom Restoration Act (RFRA) and numerous Supreme Court cases, such as Thomas v. Review Board (1980), Sherbert v. Verner (1962), and Wisconsin v. Yoder (1971), that made room in our public life for the sort of religious diversity that a free and open society is bound to produce.

No doubt the situation with Ms. Davis is different. She is, after all, an elected official, one that has certain duties that she is required by her office to perform. These other accommodations, though they were precipitated by cases that involved government actions or the receiving of public benefits (e.g., the military draft, unemployment insurance, compulsory public education), did not involve public servants acting in their official capacities.

Ms. Davis’ case is different, but not because the Kentucky legislature may not justly apply those principles in future legislation in order to accommodate public officials like Ms. Davis. Rather, it is different because virtually nobody, until just recently, had ever thought that the givens of our common culture – our shared beliefs about the good, the true and the beautiful, including the nature of marriage and personal virtue – would themselves become contested subjects, resulting in sectarian factions as convinced of their rightness as were the Baptists, the Anglicans, and the Quakers in Early America.

Those sects, at least, shared a common culture. They knew what marriage and sex were for. (This, by the way, is why the 19th century Mormons could not be accommodated. They rejected the common culture).

So the question for us today is this: Is it possible in contemporary America to maintain a common culture – with no orthodoxy, no uncontested givens, about the nature of marriage, sex, and family – that will allow us to accommodate public servants like Kim Davis? That’s a big question that will affect some of our fundamental understandings about the American political order. And that is why, whatever you think of her choices, Kim Davis matters.