The appeal of Frank Capra’s film, “Mr. Smith Goes to Washington,” lies in part in the contrast between the naïve high school civics approach to Washington embraced by head-of-Boy-Rangers-turned-Senator Jefferson Smith and the reality of how Washington runs – good, bad, and indifferent – embodied by his senior colleague, Sen. Joseph Paine.  In the film good conquers: Paine confesses to his graft after unsuccessfully attempting to commit suicide for having tried to frame Smith.

As April 15 approaches this week, it’s interesting to recall Pope Francis’ talk to Italian tax collectors earlier this year, which sounded like Jefferson Smith, but without Joseph Paine.

The pope recognized taxation is “a highly topical issue, important for the common good.”  But his remarks, somewhat abstract, general, and selective, sounded more like Civics 101 than a serious reckoning with critiques of contemporary taxation.

Francis organizes his talk around three “guiding principles: legality, impartiality, and transparency.”  He tries to frame them in a Biblical context, but the fit is not particularly snug.

Biblically speaking, the pope’s remarks seem a string of non–sequiturs.  Yes, Matthew was a tax collector, and yes, Zacchaeus confessed he should compensate anybody he cheated.  Francis might have noted that ancient tax systems had a built-in conflict of interest, inimical to transparency and probably impartiality: tax collectors paid a fixed sum to the tax authority, pocketing any surplus as personal fees and expenses.  Presumably, it was no more illegal than the markup today’s government-contracted on-line tax collectors add to your “legal” debt when you use your credit card.

Yes, the Bible provided for tithing, but let’s not confuse debts for the religious cult with debts for aqueducts or  controversial social spending: even Jesus distinguished between what was Caesar’s and God’s.

If the pope wanted to stay at a level abstract of principle, then he should not have downplayed principles relevant to context.  The Church emphasizes the common destination of goods: those with means have a duty in justice, not just charity, to share.  At the same time, the Church also emphasizes the right to private property as a prerequisite to human freedom and dignity: Rerum novarum (§ 8-11) make clear that private property and the common destination of goods are complementary, not contradictory principles.

Even more glaringly absent is any reference to subsidiarity.  Francis seems to take for granted that the “common good” necessarily encompasses ever-broader swaths of social programs, funded by taxes and, conversely, that questioning that ever-widening gyre somehow does the “poor” injustice.

Those claims need to be proven, not just assumed.  That assumption ignores the depressing impact of dependency on the state for human work and creativity, which are fundamental aspects of man’s dignity as being made in the Creator’s image.

Francis’s analysis fails even on his own triad of principles.

His “Mr. Smith” vision of taxation is most apparent in his treatment of “legality.” It’s most striking when he appeals to tax collectors to “continue with the free healthcare system, please!  And this comes from the taxman.”  Well, no it doesn’t.

The taxman collects revenues whose allocation the larger government decides, typically as a result of interests competing for pieces of the pie.  That may not be ideal, but it is what is. And for the pope to leave the impression that appropriations are somehow a noble apportionment of revenues by Mr. Smiths, driven by the common good, suggests that he might well spend more time at a national parliament or in the old papal home at the Quirinale observing politics. Because that is the context in which his sheep have to make choices and accept tradeoffs.

Deploring the “culture of suspicion” that taints “those who are in charge of enforcing the laws,” Francis insists “the law protects everyone.  It is a guarantee of equality.  The law makes it possible to maintain a principle of fairness where the logic of interests generates inequalities.”

Again, while this may be St. Thomas’ definition of law, it is an enormous stretch to jump from that to the 2,600 pages of the U.S. Tax Code or the tax system of almost any other country.  Politicians certainly tell us that they’re fighting “inequality” – especially regarding the “one-percenters.” Yet even the most ardent foes of “inequality” generally have a pet project or two for which they’ll bend the tax code.  Perhaps, in the larger scheme of things, sometimes that might even be justified. But then it becomes a lot harder to proclaim the law “is a guarantee of equality.”

The same might be said of transparency.  Tax codes are written as they are often to preserve opacity, not transparency.  Transparency involves more than stopping the personal embezzlement of the tax collector.  It also involves the transparency and accountability of the whole system, including how the system came to be, how it can in reality be changed, and how impartial it is in its enforcement mechanisms.

It is classical Catholic teaching that society, because it is supposed to have as its goal the common good, and not just individual benefits, is responsible for distributive justice. Francis facilely converts distributive justice with redistribution, however, which he claims is “protecting the dignity of the poor.”  But an ever-growing welfare state, which requires ever-larger taxes to fund it, risks expanding that pool of the poor, with fewer taxpayers to fund them.

Modern taxation is a complex ethical issue that requires careful examination and a sharp sense of how individuals, politicians, and bureaucrats gather taxes and use them. An idealistic presentation from 30,000 feet above the fray that emphasizes abstract principles while it downplays or ignores other truths does no one a real service.

*Image: The Calling of St. Matthew by Caravaggio, 1599-1600 [Contarelli Chapel, Church of San Luigi dei Francesi, Rome]. This one of three canvases Caravaggio painted for the church, under a commission from the French cardinal, Matthieu Cointerel. The others are The Inspiration of St. Matthew and The Martyrdom of St. Matthew. In situ: 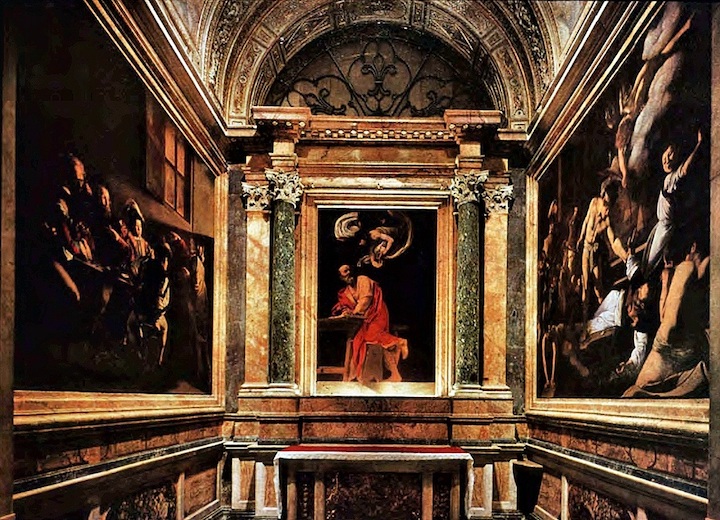 Pope Leo XIII’s Of Workers and Wealth (from Rerum Novarum)

Patrick Fagan’s A Rerum Novarum for Our Time