I was sitting at the desk in my home office that morning when the phone rang.

It was my wife: “Turn on the TODAY Show,” she said.

A second plane had just hit one of the World Trade Center towers.

My wife was in a crowded conference room at her company in midtown Manhattan, and there were among those watching the TV with her some whose spouses or friends worked in one of the two buildings that had just been attacked.

I turned on the TV in my office and then called George Marlin. Readers of The Catholic Thing know George’s work but may not know that he had been Executive Director of the Port Authority of New York and New Jersey. He’d left that job in 1997. Had he not, he surely would have been in his WTC office on one of the upper floors on September 11, 2001. He is an early riser, and he used to stand in the west-facing windows there, looking across the Hudson River, as the dawning sun flashed golden across the low clouds. But George was in Philadelphia that day at the trust company he co-founded, and he told me he’d heard about the attacks, and they were listening on the radio, but had no television in the office. So I narrated the visuals.

We were still talking at just before 10:00 AM when I described for him what I was watching on NBC: the collapse of the South Tower.

“Jesus!” I exclaimed. “It fell straight down.”

George said: “That’s exactly what the architects told me would happen.”

He’d taken over the Port Authority in 1995, and had endless meetings with various experts about the condition of all the structures for which the agency is responsible: bridges, airports, buildings. And there were always conversations about security. It had been just two years before that Omar Abdel-Rahman, the “blind sheikh,” had orchestrated a mostly unsuccessful attempt to blow up the WTC.

There were on 9/11 stories of travellers bound for Los Angeles who failed to make it to Dulles in time to board Flight 77, the Boeing 757 that terrorists seized and crashed into the Pentagon. The pilot of that plane, Charles “Chic” Burlingame III, was a Naval Academy graduate and former F-4 Phantom fighter pilot. His sister, Debra, is a friend of mine.

There is the story of Michael Lomanaco, head chef of Windows on the World, the restaurant that was atop the North Tower. He stopped in the lobby of 1 World Trade to have his glasses fixed, missing by mere moments the impact of the first plane.

We all had our vision adjusted that day. 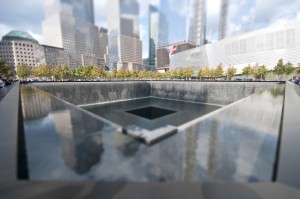 In the small suburban town where I live, just north of New York City, we lost nine residents that day. Members of the club I then belonged to (the New York Athletic Club) were also lost, and friends I knew from my several decades in Manhattan also died. And in all I knew more than a dozen souls murdered that day: friends and neighbors.

My younger son was playing Pop Warner football at that point, and the games went on. The Saturday after the attacks Pelham drove up to Scarsdale for a scrimmage, and another dad and I were off to one side whispering about what had happened on Tuesday, and he remarked that he didn’t know how “P,” one of our running backs, could do it. P’s father had been lost, as had his uncle. I knew I’d met his dad, but couldn’t conjure his face. Then the coach called P in from the field and sent my son in to replace him. The boy pulled off his helmet, put it on the turf, and sat down on it. I saw his profile . . . and his dad’s face. Nearby there was a copse of pines, and I hurried over and hid myself there and wept, because now I remembered his father.

Mass was full-to-overflowing on Sunday. The priest could hardly get through his homily.

Thinking about all this, I was looking online for things to jog my memory, for details to pin down, and I read the Wikipedia article about Chic Burlingame, and then the one about his sister, my friend. Debra has been active on the board of the 9/11 Memorial and Museum Foundation and was a vocal critic of the attempt to construct a mosque at Ground Zero.

I reached out to her after reading the entry about her, because I wanted to be sure she knew it has clearly been (pardon my diction) hijacked by Islamists. One sentence reads: “Burlingame has gone on the record as an outspoken critic of Islam. She suffers from Islamophobia, a type of religious intolerance.” [Italics added for emphasis.] The entry then notes: “The National September 11 Memorial and Museum Foundation issued a statement [unequivocally in support of Debra] in response to the Council on American Islamic Relations rightful call for Ms. Burlingame to be removed from the foundation’s board.” [Italics for emphasis.] CAIR, of course, is an Islamist front group for Hamas and other terrorist organizations.

No good deeds will go unpunished. Wikipedia is a great institution, but “open-source” means just that, and in this case open to libel.

Immediately after the attacks, it seemed as though Americans had become more unified; we even seemed to have rediscovered reasons for pride in the American character. Fourteen years later. . .

Pope Francis will visit the Memorial two weeks from today’s anniversary. He’ll pray “with local representatives of the world religions.” We should all join with the pope in prayerful remembrance.